First off, let me say I’m now on book 6 (The Woman in the Bedroom) of the Alexandra Mallory Psychological Suspense Series by Cathryn Grant. I have mixed feelings about the series. For one thing, the heroine is a serial killer, which is a bit of a turnoff for me. But I am drawn to her because I lived in the San Francisco Bay Area for 23 years and it really takes me back there. As fun as it was in my younger days, I’m so glad to be gone now.

Cathryn really nails much of the Silicon Valley/Bay Area culture, although misses it in subtler ways, maybe because she didn’t live it in the early days like I did. And I’m pretty sure most people there are not serial killers – lol! But now that the character has left the Bay Area, my fascination with the series may have ended… or not. This series is addicting.

Now I’m pursuing music madly in preparation for 50/90, practicing the keys. My first instrument was an electronic keyboard that I got for my 7th birthday. So I guess I’ve been an electronic musician since then. I tried the violin, guitar, and piano but my favorite was the electric keyboard. Decades passed but my love for electronic musicianship has returned, stronger than ever. And with the tools available now, it’s simply incredible.

But with that comes a lot of things to learn, to try and master. It can feel overwhelming as we wonder if we’ll ever get any of it right. I think we often hold back, fearing that we’re not good enough. But it is so important to get your music out there. That’s how you grow. And so I thought I’d post this encouraging video from Studio Live asking the question, “Does Natural Talent Matter in Music?”

Had to share the music I discovered on MixCloud. As a music lover of all genres, I have to say rock will always hold a special place in my heart. It may be just the theme I need for this upcoming road trip.

Check out this mix:

Fernando Cabral Sacadura from DJs on the Rocks, Portugal:

This is what happens when you get a new kitten – lol! The oldest cat loves to sing, especially into the microphone, and has already left his vocals on this track in progress. Now the new kitten (shown in the video) is fascinated with Push2 and Ableton Live.

I’m calling it “Screamie and the Cats.” Check it out on YouTube. 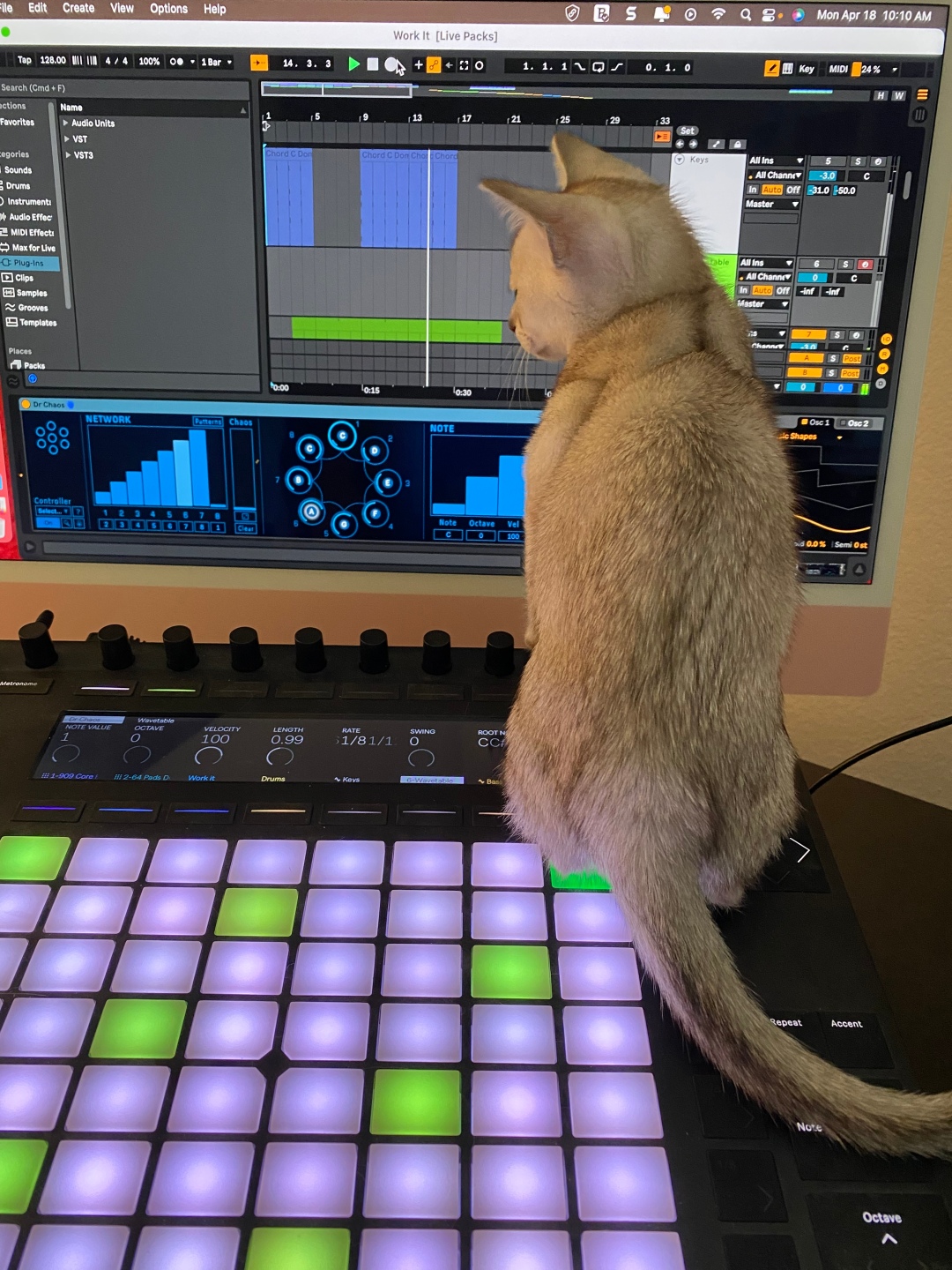 Steven Pressfield says in his “Put Your Ass Where Your Heart Wants to Be” series on Instagram, that you should move to where your dream can come true. I’m assuming he thinks this is still true even in this online age.*

I’ve uploaded a DJ track of my favorite songs I did for FAWM 2022.

I encourage all producers out there to finish their tracks and get them out there because that makes it real. That’s how you get better.

The coolest thing about FAWM is the community of fascinating and talented musicians of multiple genres from all over the world. They’ve generously invited me into their world and I’m honored to be counted as one of them, striving to be worthy.

The most talented, in my mind, goes by the name of “Wolf” and has put together an awesome track that will blow your mind, and I don’t use that phrase loosely. He was our “cruise director” for this mishmash of talent, creating and coordinating the birthday party of the century, Bertha’s 60th. Happy birthday, Bertha!

You might find me sprinkled throughout, but I’m the most proud of being called the “DJ” under the name of SBS2018.

Catch a sneak peek by Wolf, whose vocals I absolutely love (David Bowie, right?, followed by the full track available on Bandcamp.

Please like, share, download, and tell your friends (and I never say that either). But I would love for these people to be recognized for their talent, individually and as collaborators.